Our photos of plants and animals in areas which have not been impacted by clearcutting/salvage logging, at CalPhotos 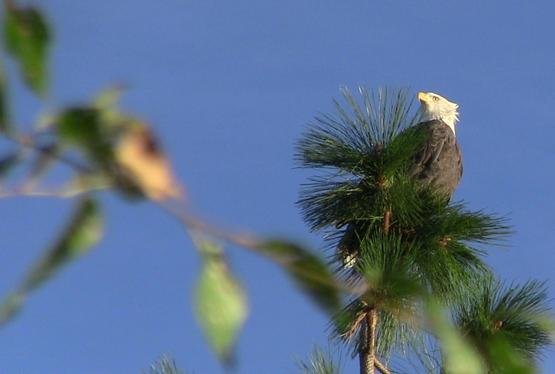 The aerial image below shows what the Battle Creek watershed west of Lassen Volcanic National Park looked like in the late '90s, before the  excessive clearcutting that began in 1998. The blue line is Digger Creek, the boundary between Shasta and Tehama counties.

Salvage logging post- fire. The damage from equipment to the soil on the slopes is readily apparent.

The image above shows  clearcuts from the multitude of different logging plans in the Manton and Shingletown area, and additional clearcuts in the surrounding watersheds and the post-fire  salvage logged area (brown boot-shaped area left of image center) . 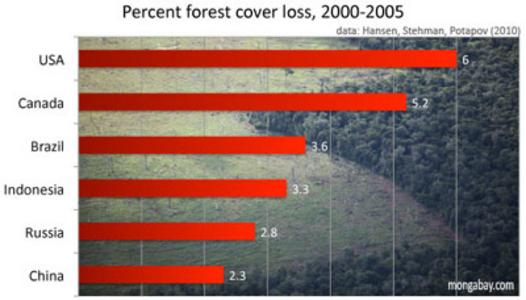 In August 2012, the Ponderosa Fire burned much of the industrial timberland and the homes that were on the edge of it.
​The image below shows the fire boundary, the previously cut units, and the in-process and proposed units. 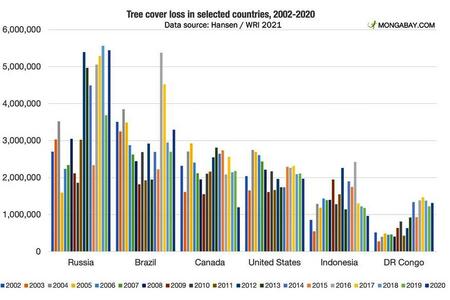 Clearcutting Impacts Them All​

Many species of animals on the ground and in the air, including this bald eagle, need mature forests to live in.
Estimates for the amount of Old Growth remaining: 1-3%
Age when forests start exhibiting old growth characteristics: 200+ years
SPI's length of rotations between timber harvests: 50 - 80 years
Possibility of any plantations becoming old growth: 0%

Thousand Lakes Wilderness. Clearcutting and plantation conversion means that no trees will ever have enough time to
grow this large. The old growth from the past is almost gone and the middle- aged growth that would become old growth
​someday is being cut decades before it can achieve that.

​Your tax-deductible contributions will help our work to save California's forests from deforestation.
Donate using PayPal below

Surface and sub-surface water pressure on soils which have had the standing dead trees and root systems removed by "salvage" logging causes the slopes to slide. Basic hydrology 101: water flows downhill. Loose soil carried by storm water moves to the nearest stream.

The next satellite image shows the same area in 2017. Each brown hole is a clearcut of between 14 and 27 acres. Highway 44 on the north and Highway 36 on the south are the approximate boundaries of the Battle Creek watershed.

Animals historically found in California forests include: porcupines, bald eagles, wolverines and red fox. Due to the
​many changes to habitat, these species and many others are struggling for survival.

Clearcutting and the use of heavy equipment and all of the activities associated with it, as well as herbicide use before and after logging to kill native vegetation, depletes and destroys the soil. Aside from the negative effects of compaction and erosion, roads are the largest cause of sediment deposits in streams, but all the sediment does not originate from them.  Instead, roads act as a conduit for water traveling over cut areas upslope of them.

Clearcutting and the subsequent herbicide use have obvious impacts on endangered and
​threatened species, but they affect all species, including our own.

This is a creek below the salvage logging, on the same day, and the same storm:

A clearcut up close. Multiply this by  hundreds  or thousands  when looking at the aerial images.

Clearcutting is currently legal on private land, but while private rights are important, they can not be at the expense
of the majority of the people's needs, health and welfare. California state laws provide that the water, air,
​and wildlife need to be protected to benefit all the citizens of the state.

"Better to not destroy it, and
​have no regrets"
Battle Creek Alliance​

Sierra Pacific Industries (SPI) owns this land as well as nearly 2 million acres of the industrial timberland in the state. SPI has already cut, or has plans to cut, the majority of those acres. There are other companies clearcutting too.

By law, the cumulative impacts of interrelated, adjacent projects must be analyzed. Yet, by subdividing the watershed into 9  "subwatersheds" each of the 16 timber harvest plans has been evaluated as if it were the only project.

This is illegal as well as ecologically disastrous.

SPI's self-expressed plans are to return in 5 to 10 years to cut the biodiverse forests that remain between the clearcuts, and turn them into more monoculture tree plantations. This is being allowed to happen in watersheds throughout California.

Go to our "What you can do" page to contact the Governor's Office.​

The following image shows a creek during a rainstorm above the salvage
​logging in March, 2013 (these impacts continue on):​

A former home which burned on the edge of the industrial timberland.

Deforestation is a major cause of climate disruption.
​The US has lost a higher percentage of its forest cover than either Canada or Brazil. 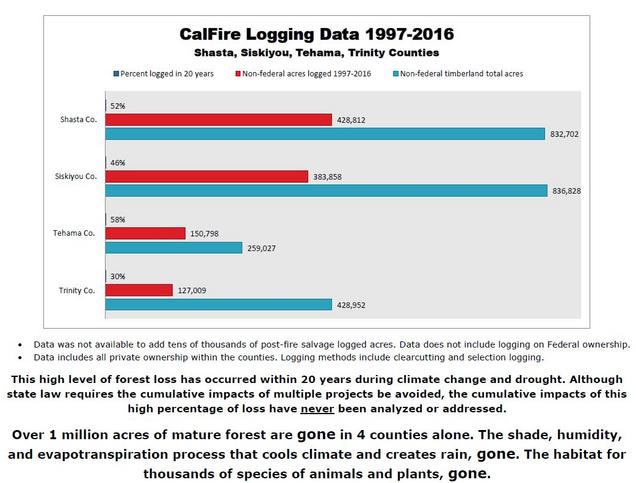 The difference between a forest and a tree plantation:

Above: The 2 year old replanted trees in one of the adjacent units that had been clearcut.

The Battle Creek Alliance is dedicated to protecting the public trust resources of water, air, soil and wildlife, protecting diversity and raising public awareness through education throughout the inland counties of northern California.

It just doesn't make any sense to continue clearcutting the watersheds of California during ongoing climate change and water problems. Yet, the timber industry and the regulatory agencies continue on this deadly path, with no questions asked about the damage to the natural world which supports all life.

It's the 21st century, not 1910. Look around. Are the exploitative robber baron methods of the 19th and 20th centuries of benefit to the majority of people or other species?

Our documentary about the destruction of CA watersheds

Protect  Watersheds & Forests as if your life depends on it.
Because IT DOES

Aerial view of Lassen clear cuts.
Lassen Volcanic National Park is at the top of the photo where the clearcuts end. 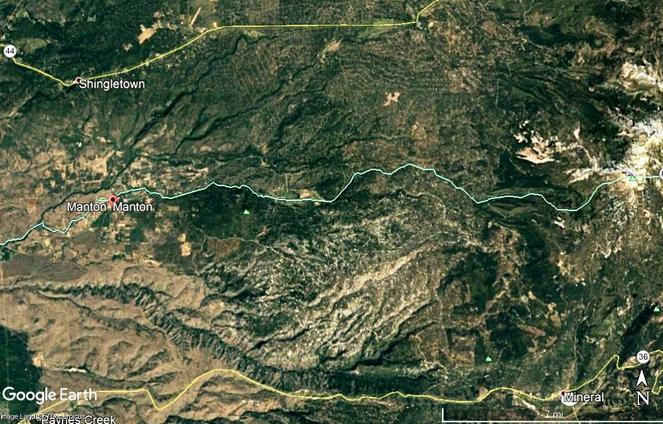 This huge modern tree killer is called a feller-buncher. It kills jobs also, using 1 person in the
​place of a crew of 5 or more, an 80% loss of jobs. 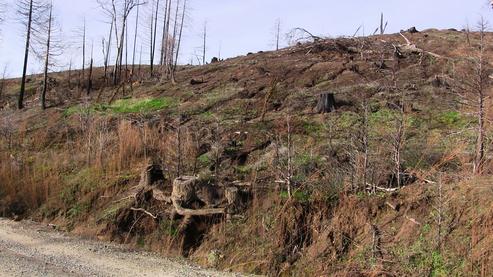 "What you destroy today, you might
​regret tomorrow"
​Dave Pirner, Soul Asylum

is to ensure that the true environmental impacts are being analyzed. With this analysis, permanent damage to the
​resources that benefit all life can be averted.  For the present, for the future.

Mail checks to:  SOL Communications
Rock Creek Rd.   Manton, CA 96059
Signal of Love Communications is a 501 (c) (3) which acts as an umbrella for Battle Creek Alliance

The Ponderosa Fire burned over 27,000 acres. About two- thirds of those acres were industrial timberland.

The fire cost the state over  34  million  dollars  to fight.  Did SPI pay the costs? Nope. The taxpayers did.

Who reaped the profits from the salvage logging? (Hint: not the taxpayers who paid the fire costs.)

In the aftermath of the Ponderosa fire, the land has been further decimated by salvage logging: ​

Above: The remaining acres between 2 clearcut units. By law, this can be cut 5 years after the completion of the earlier clearcuts.

Battle Creek is one of the largest tributaries of the Sacramento River and one of the few remaining places which supports wild run salmon.

The Chinook Salmon population has been declining rapidly. The $125 million Salmon Restoration Project is downstream of the pictured clearcuts. Lassen National Forest and Park are just east of here.